Beauty and the Beast is an American fantasy-drama series which first aired on CBS in 1987. Creator Ron Koslow’s updated version of the fairy tale has a double focus: the relationship between Vincent (Ron Perlman), a mythic, noble man-beast, and Catherine (Linda Hamilton), a savvy Assistant District Attorney in New York; and a secret Utopian community of social outcasts living in a subterranean sanctuary. Through an empathetic bond, Vincent senses Catherine’s emotions, and becomes her guardian.

The series follows the developing relationship between the characters and the division between New York and the hidden world beneath it. In a twist from the original tale, however, this “beast” does not transform into society’s idea of beauty after gaining the love of Catherine. Rather, Vincent’s inner beauty is allowed to remain the focus of who he is, and it is Catherine’s life that transforms from her relationship to Vincent.

As the title indicates, the premise of the series is inspired by the fairy tale “Beauty and the Beast”; in particular, there is some connection to the Jean Cocteau’s 1946 French film, La Belle et la Bête.

George R.R. Martin, who would later write the A Song of Ice and Fire book series, was a writer and producer on the show.

Catherine Chandler (played by Linda Hamilton) is abducted, beaten, slashed and left to die in Central Park because she was inadvertently mistaken for somebody else. She is rescued and cared for by Vincent (played by Ron Perlman) who has taken her to Father (played by Roy Dotrice), head of a hidden community of people dwelling in tunnels below the city of New York. Ten days later, Catherine returns to the surface with the promise of keeping Vincent’s secret and the challenge to go on after her terrible attack. After completing her recovery, her life begins a serious transition: she takes self-defense lessons, leaves her comfortable job at her father’s law firm and joins the Manhattan District Attorney’s office as an Assistant District Attorney. Her first action involves her asking Carol Stabler about those men that attacked her, where she states that they were part of an illegal escort service run by Martin Belmont. When Catherine is attacked by Martin Belmont’s men, she is saved by Vincent, who mauls the men.

During the course of the first season, the production team fashioned a blend of romance and crime drama, which used both Catherine’s position as an ADA and her will to help Vincent and his world to place her in moments of physical danger that would bring the idealized romantic figure of Vincent to the surface world as her guardian angel.

During its second season, the series shifted its focus slightly to add more character development, as the central characters spent considerable time exploring their relationships with the inhabitants of the Tunnel World, where Catherine had finally been accepted as a friend and “Helper” (someone who assists the Tunnel community with what they need to survive and by keeping their secret). More people from the World Above turned up for emotional support and healing in the secure environment of the World Below.

Near the end of the season however, in an effort to boost faltering ratings, the action orientation returned as a result of the misleadings of the recurrent villain Paracelsus (played by Tony Jay). In a cliffhanger final episode, Catherine is seen walking down a tunnel into a chamber, where Vincent is suffering from a violent madness.

When the series returned for its abbreviated third season late in 1989, Linda Hamilton had announced her decision to leave the series as she was pregnant at the time. It was a decision that, along with the network’s desire to attract more male viewers, would have serious repercussions for the show’s continued survival. In the resolution to the previous season’s cliffhanger, Catherine rescued Vincent from his inner demons but was kidnapped by a man named Gabriel (played by Stephen McHattie), the ruthless head of a huge criminal empire she had been investigating, which was trying to corrupt the D.A.’s office. She was killed, but not before giving birth to Vincent’s son, who was held hostage by the evil Gabriel. Catherine’s boss and close friend Joe Maxwell (Jay Acovone) hired Diana Bennett (Jo Anderson), a criminal profiler with the police department, to track down Catherine’s killer. Quite naturally, her investigation ultimately led her to the now darkly obsessed and grieving Vincent.

Although still popular with its dedicated fans, the darker, more resolutely violent aspects of the reworked concept, coupled with the fatal loss of the all-important central relationship between Catherine and Vincent, led to further declining ratings and ultimately cancellation. 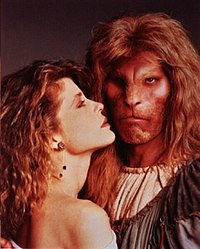 Fabulous Films has released the entire series on DVD in Region 2.

Shock Entertainment has released the entire series on DVD in Region 4.

An active fan community (self-titled “Helpers” or “the tunnel community”) arose during the show’s run, helping organize a petition drive to assure that there would be a third season. They have published the usual fanzines, fan fiction and collections of filk music inspired by the show, and as of 2013 continue to hold various fan conventions around the world.

CBS Television Studios, which owns the rights to the series, developed a reboot for the series. Ron Koslow, the creator of the original, is executive producing, along with the earlier show’s producers, Paul Junger Witt and Tony Thomas. The reboot has been described as a “modern day romantic love story with a procedural twist.” In the United States, it airs on The CW.

The television series stars New Zealand actor Jay Ryan as Vincent (the “beast”) and Canadian actress Kristin Kreuk as Catherine (the “beauty”). The pilot was filmed in Toronto, Ontario, Canada in March 2012.

Hello, is it us you're looking for (ahem!). We use cookies to improve your experience of our site. By using this website, we assume you consent to all cookies in accordance with our Cookie Policy, you can however, opt out of this.

This website uses cookies to improve your experience while you navigate through the website. Out of these, the cookies that are categorized as necessary are stored on your browser as they are essential for the working of basic functionalities of the website. We also use third-party cookies that help us analyze and understand how you use this website. These cookies will be stored in your browser only with your consent. You also have the option to opt-out of these cookies. But opting out of some of these cookies may affect your browsing experience.
Necessary Always Enabled
Necessary cookies are absolutely essential for the website to function properly. This category only includes cookies that ensures basic functionalities and security features of the website. These cookies do not store any personal information.
Non-necessary
Any cookies that may not be particularly necessary for the website to function and is used specifically to collect user personal data via analytics, ads, other embedded contents are termed as non-necessary cookies. It is mandatory to procure user consent prior to running these cookies on your website.
SAVE & ACCEPT
%d bloggers like this: